The loggerhead sea turtle (Caretta caretta) is one of eight species of sea turtle worldwide and also hatches on the beaches of southern Crete, from Kokkinos Pyrgos, Kalamaki, Komos to Malata.

From late May to September, the females come to the beaches to lay eggs. There they dig a nest in which they lay up to 120 table tennis ball-sized eggs and then cover them completely with sand.

The oviposition follows a biological program: where the female was born, she also lays her brood. If it is disturbed while lying down (e.g. hindered by loungers and umbrellas, loud music or bright lights), she returns to the sea and tries again on a nearby beach the next few nights. However, if the attempt fails again, it will lose its brood in the sea and will never be able to return!

If the eggs have been laid successfully, the approx. 3-5 cm small turtles will hatch after approx. 60 days. They only hatch on the nights when the moonlight is reflected from the sea and guides the little ones on their way. The artificial light from tavernas and bars on the beaches often lures the newly hatched in the wrong direction, which then usually leads to death if they dry out.
But even if they go in the right direction, there are predators like gulls, but also dogs and cats waiting for them. Even in the water, they are not safe, as larger fish lounge around here. It is believed that out of 1,000 small turtles, only one will grow up! 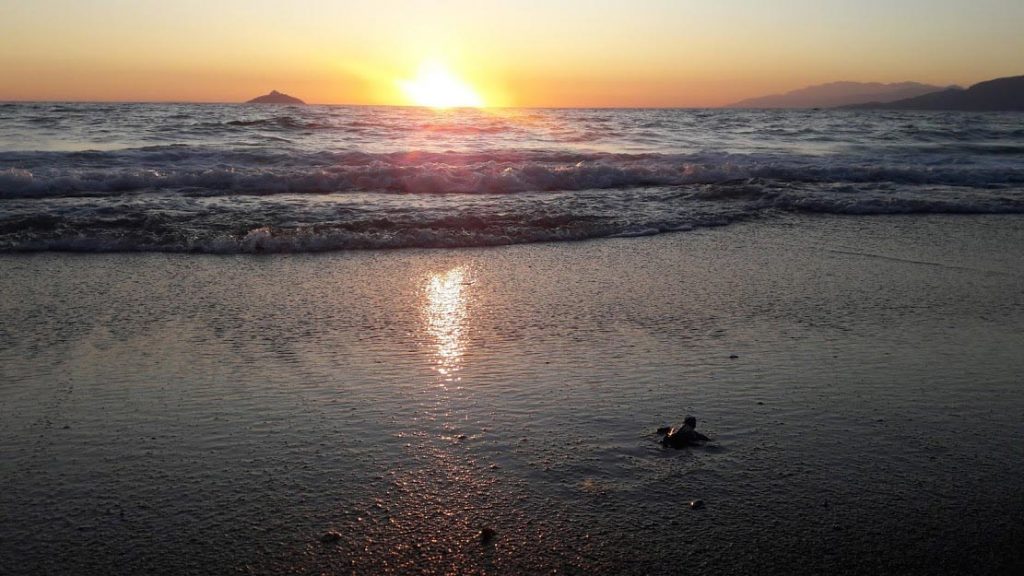 Archelon (STPS) and the protective measures

The Archelon Sea Turtle Protection Society (STPS) was founded in 1983 when tourism in Greece was growing rapidly. The population declined dramatically, and the number of nests also decreased drastically: in 1985 there were around 850 nests, before that there were around 2000.

Due to pressure from STPS and other environmental organizations, important protective regulations have been introduced, e.g. Nocturnal stay on nesting beaches is not permitted, construction activities have been restricted, boat rental and fishing are regulated due to the division of the protection zones and much more.

Since then, the number of nests has increased again. Today STPS is active throughout Greece. Most of the STPS employees are volunteers from all over the world who work for the association free of charge. They count the nests and traces of the females, protect the nests in endangered places with wire or wooden frames, and do educational work.

In order for this endangered species to survive, the protection regulations must be complied with and the work of STPS must be supported as much as possible!

Caretta Caretta is under international protection according to the Washington Convention on Species Protection.
The European Union lists Caretta Caretta as a priority species, so the loggerhead sea turtle is a species that must be strictly protected

What can you to to help?

To ensure that the hatchlings can safely reach the open sea, the following must be observed:
1) Stay away from the nests when going on the beach at night.
2) Don’t make a campfire.
3) Turn off or cover the lights on the beach.

With your help, we are monitoring and protecting sea turtles, their nests and hatchlings on the beaches as well as rescuing injured/sick sea turtles and treating them at the Rescue Centre.

We are inviting enthusiastic and committed individuals to join the volunteer projects in 2021. Read on and check out requirements and projects. Get to know our policies and how we are dealing with COVID-19 issues.

Are you ready to volunteer? The sooner you apply, the better!