Kritamos (Rock Samphire) is linked to Ancient Greece in many ways, in the myths surrounding Prometheus, as well as in Hippocratic medicine. It is also known in Britain and has been mentioned by Shakespeare. Although the Greek islands were once the culinary province of kritamos, it is now becoming more and more well known by chefs and restaurateurs all over the world, notably urban centers running top-end Greek restaurants, whose owners get it shipped into their kitchens.

Kritamos is pickled in the same way as capers; all parts of the plant – stems, leaves and seed pods, except the flower – can be prepared in this way for later use as a flavoring in salads. The leaves and the most tender stalks are the best for pickling. In its fresh form, it has an appealing smell, something like a mixture of fennel and peppermint. No surprise that it is also known as sea fennel. When pickled in vinegar, its aroma and taste change, but it still adds an interesting dimension to a potato or tomato salad. 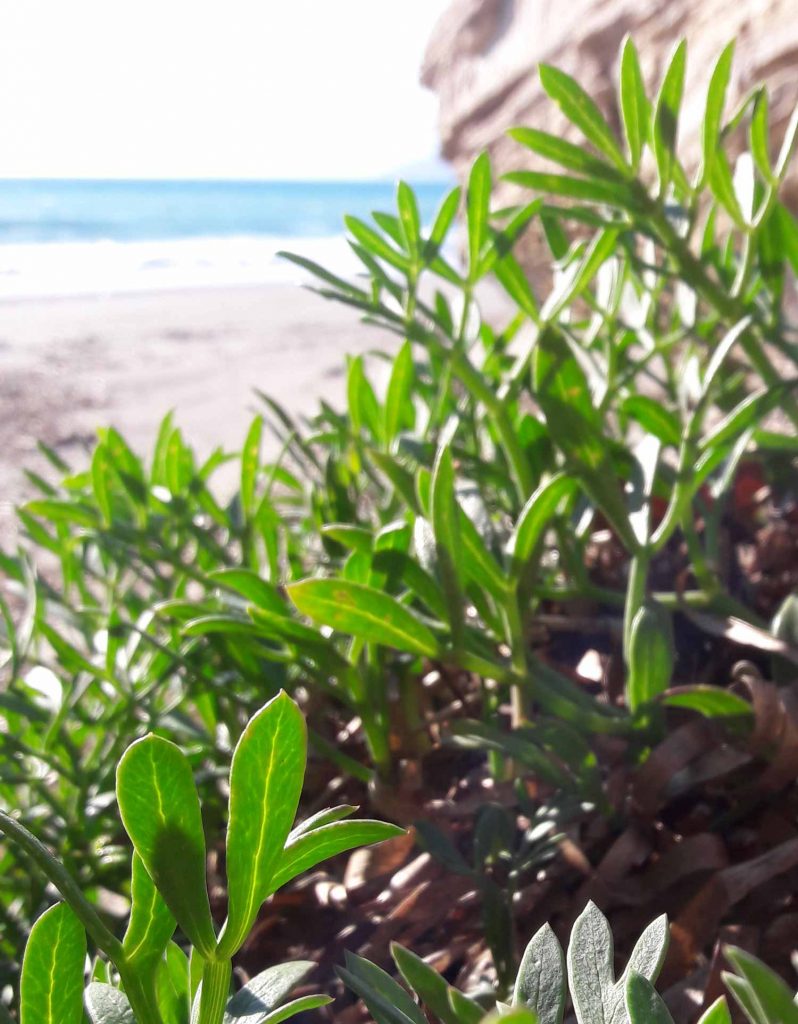 Greek name, kritamo, comes from the ancient Greek word for barley, krithmon, because the seeds of both plants resemble one another. Rock samphire isn’t unique to Greece, indeed, it grows wild along the coasts of the entire Mediterranean as well as in Britain and Ireland.

Its English name comes from ”sampiere”, from the French “Saint Pierre” (Saint Peter), the patron saint of fishermen. The plant likes the sea and flourishes in rocky, salt-sprayed cliffs and along beaches. It is sometimes called sea asparagus, sea fennel, or sea pickle.
The English have liked many varieties of samphire for eons. Typically, they pickle them – so do the Greeks. Samphire is mentioned by Shakespeare in King Lear: Half-way down Hangs one that gathers samphire; dreadful trade! (Act IV, Scene VI).

Kritamos is one of the healthiest greens, its therapeutic values have been known since antiquity. Both Dioscorides, the father of pharmacology, and Pliny, renowned botanist, wrote about its properties. Hippocrates recommended it for its diuretic and detoxifying abilities.

It is full of antioxidants and has used as such in cosmetics, too. It is said to brighten age spots and to lend a healthy glow to the skin. It is rich in iodine and is packed with phytochemicals that protect the liver, heart, and cellular DNA. It is also rich in vitamins A, C, B2, B15, amino acids, and minerals, such as iron, calcium and magnesium phosphorus, calcium, silica, zinc, manganese, and vitamin D.