The Palace of Phaistos

The palace of Phaistos is one of the most important Minoan palaces and with approx. 18,000 m² the second largest after that of Knossos. It lies in the western part of the large and fertile Messara plain on a hill from which the king was able to control the country and the coast with the ports (Komos and Matala).

In the Area Messara, you can visit the ruins of the second largest ancient palace, the Palace of Phaistos. It is smaller than the mythical Knossos palace but still big enough to make an impression. With its location on the eastern slope of Mount Kastri, it offers a perfect view of the wide valley of Messara and the mountain range with the highest mountain in Crete – Psiloritis. A light breeze often blows here, which makes visiting the archaeological site pleasantly.

It is believed that the palace of Phaistos was an administrative, manufacturing, and trading center, where goods for domestic and foreign trade, as well as for religious cults were kept. The large buildings and many ceramic finds certainly indicate a time of great prosperity.

In ancient times, Phaistos ruled this region of Crete and had its own port in the nearby Kommos on the Libyan Sea. When exploring the excavations, the monumental staircase that forms the west entrance to the palace and the tiled inner courtyard, from which you can enjoy the view of the Psiloritis Mountains, are particularly striking. This was where the main door was, on the sides of which the guards were probably in the recesses, and in the storage rooms, there are huge clay pots – pitos – in which oil used to be stored. 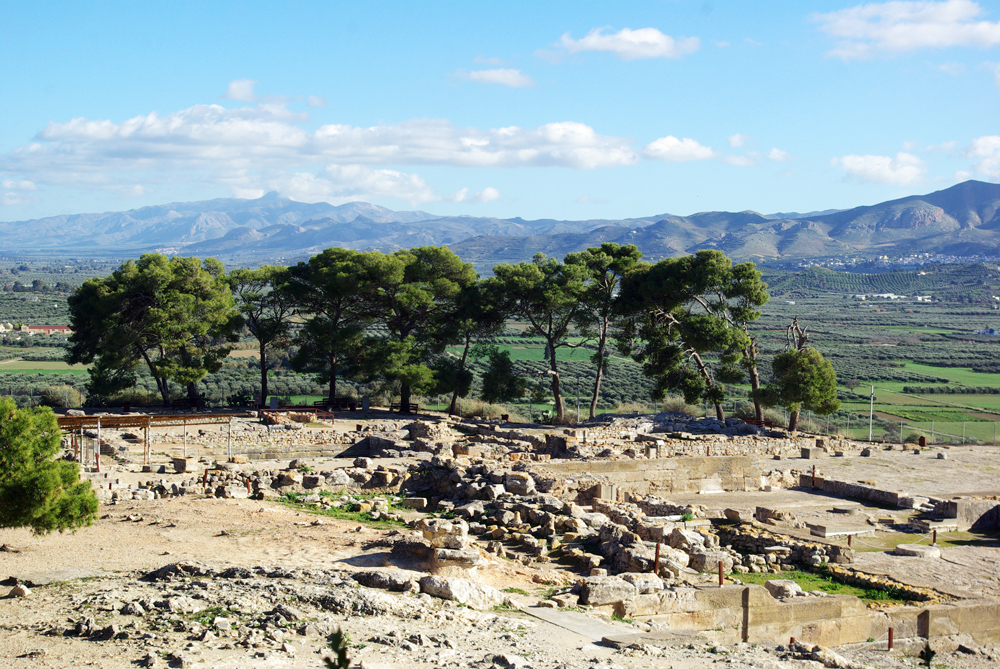 Phaistos was one of the most important centres of Minoan civilization, and the most wealthy and powerful city in southern Crete.

The Palace of Phaistos was discovered in 1900 by Federico Halbherr, an Italian archaeologist who was also a friend and advisor to Sir Arthur Evans. Halbherr began digging in Phaistos earlier than Evans did in Knossos. It was thanks to him that the famous Gorton tablets with the written law, which can be seen today in Gortyna and in the villa of Agia Triada, where a plaque was erected in honor of the Italian explorer, saw the light of day.

What we see today are mainly the ruins of the Second Palace, which were built on the remains of the First Palace. The first palace was built around 1900 BC but was largely destroyed by an earthquake, about 200 years after. Today it is extremely difficult for archaeologists to recreate the images of both palaces as their ruins overlap. Another difficulty is the remains of several reconstructions and renovations of the first palace that were carried out during that 200-year reign.

Fortunately, the builders of the second palace did not destroy the remains of the first as they provided more valuable finds: a mysterious and still illegible disk, many seals, and clay tablets with linear writing A. However, the second palace did not contain any artifacts that archaeologists believe were quite a surprise. Perhaps the reason for this was its debilitating role and importance.

The city of Phaistos recovered from the destruction minted its own coins and continued to flourish for the next few centuries until the first century BC when it was destroyed by neighboring Gortyna.

The Phaistos Disc consists of fired clay and is about 15 centimeters in diameter. It was found on 3 July 1908 during excavation of the Minoan palace of Phaistos, near the south coast of Crete. The excavations, conducted by Italian archaeologists, were directed by Luigi Pernier. However, Luigi Pernier was not present at the site when the clay disc was discovered. The disc is one of the most famous Bronze Age finds and one of the great mysteries of Mediterranean archaeology. It contains over 240 spirally arranged human, animal and plant motifs that were printed with individual stamps. Its sophisticated manufacturing technology with movable type is in direct contrast to the uniqueness of the find. The use of reusable stamps only makes sense if used several times or even frequently. Practically everything that concerns the disc is controversial; this even includes the orientation of the writing and the language used.

Reputable scholars usually tend to avoid controversial issues that have been tackled by too many amateurs. Hardly any subject is more notorious than the Phaistos Disc, because of the countless attempts that have been made to decipher it.

The Dutch linguists Jan Best and Fred Woudhuizen have independently come to many conclusions during the past few decades that confirm the model put forward in this website. One of these is a most remarkable decipherment of the Phaistos Disc. The team’s epigraphic investigation shows that the writing direction is from the outside to the inside and that side A was inscribed first. Based on the context of the find, 1350 BCE has been determined as the date of the disc’s production.

In her extensive research on Linear B the American linguist Alice Kober found that various characters appeared over and over in the same order and that each sequence was completed with different alternating characters. Kober assumed that the same sequences corresponded to the root of a verb or noun and that the final characters marked case endings or inflections. This finding led to the decipherment of Linear B by the British architect Michael Ventris shortly after Kober’s early demise.

The Phaistos Disc, too, includes such fixed sequences with different endings, and the same applies to Luwian hieroglyphs. Of the 47 different characters used on the disc, a total of 29 can be correlated with Luwian hieroglyphs. The similarities go so far that whole words on the disc are immediately readable in Luwian, including a-su-wi-ya (B11) for “Aššuwa.” Best and Woudhuizen, therefore, came to the conclusion that the script of the disc is not that unique, but rather represents a local variant of Luwian hieroglyphic writing. When these circumstances are taken into consideration, the text becomes fully legible.

According to this interpretation, a number of places are mentioned that still bear the same name today: Messara, Phaistos, Lasithi and Knossos. Other geographical names that are familiar from the Late Bronze Age appear as well, including Achaea, Arzawa and Aššuwa. Some words are also found in Akkadian, Linear B or Egyptian hieroglyphic texts. Two personal names even appear more than 500 years later in Homer in a similar context: Nestor of Pylos and Idomeneus of Crete.

Not only the script but the language, too, is very similar to Luwian. If the above reading is correct, the text on the disc intends to settle an ownership dispute in a place called Rhytion near Pyrgos in the southwest of the plain of Messara: The Greek king Nestor has a principality in Crete that includes Knossos and parts of the plain of Lasithi and of the Messara. In the name of Nestor, Idomeneus reigns from his court at Knossos as viceroy of Lasithi and as governor of the Messara. His sphere of influence includes the local petty kings Kuneus for Phaistos and Uwas for the hinterland of Phaistos. Uwas is in a dispute with another vassal king about the control of Rhytion and wants Nestor to make a decision concerning this matter. Nestor apparently contacts the Great King of Arzawa, probably the most important Luwian state. The king of Arzawa tells Kuneus to inform Uwas about his right to rule.

The Phaistos Disc is therefore a copy, intended to remain with Kuneus in Phaistos. Uwas, too, should have received a copy. The creation of multiple copies would explain the use of stamps. In this case, the disc was probably produced at the court of the king of Arzawa, that would be in Apaša, near Ephesus, and it was written in the local dialect spoken in the Luwian part of Crete. Consequently, the Luwians would have had a lot of influence on Crete before the Mycenaeans seized power over the island. According to this hypothesis, parts of Crete even belonged to the Aššuwa league, an association of Luwian petty states.

Future excavations in Apaša, the former capital of Arzawa, could possibly bring to light other documents of similar style to the Phaistos Disc.