The stinging nettle (Urtica dioica) may deter with its nettles, but it is one of the oldest medicinal plant.

Stinging nettle has been important in herbal medicine since ancient times. The plant boasts pretty, heart-shaped leaves and yellow or pink flowers, but the stem is covered in tiny, stiff hairs that release stinging chemicals when touched.
Once it is dried, freeze-dried or cooked, stinging nettle can be safely consumed and it offers a number of potential health benefits.

It has been scientifically proven that stinging nettles can relieve osteoarthritis, arthritis, prostate problems and bladder problems as well as positively influence inflammatory bowel disease. The seeds of the nettle can be used as a vitality tonic and against hair loss, and in the form of the so-called nettle jelly, the plant replaces artificial fertilizers and pesticides.

Its scientific name, Urtica dioica, comes from the Latin word uro, which means “to burn,” because its leaves can cause a temporary burning sensation upon contact.

Stinging nettle is packed with vitamins, minerals, and trace minerals along with hefty dose of potent phytonutrients including deep-green chlorophyll and carotenoids. In fact, more than 100 chemical components have been identified in nettle, including:

Nettle tea, made from dried nettle leaves, is perhaps best known for its high mineral content. The leaves are packed with more minerals, especially magnesium and calcium, than a number of other medicinal herbs. 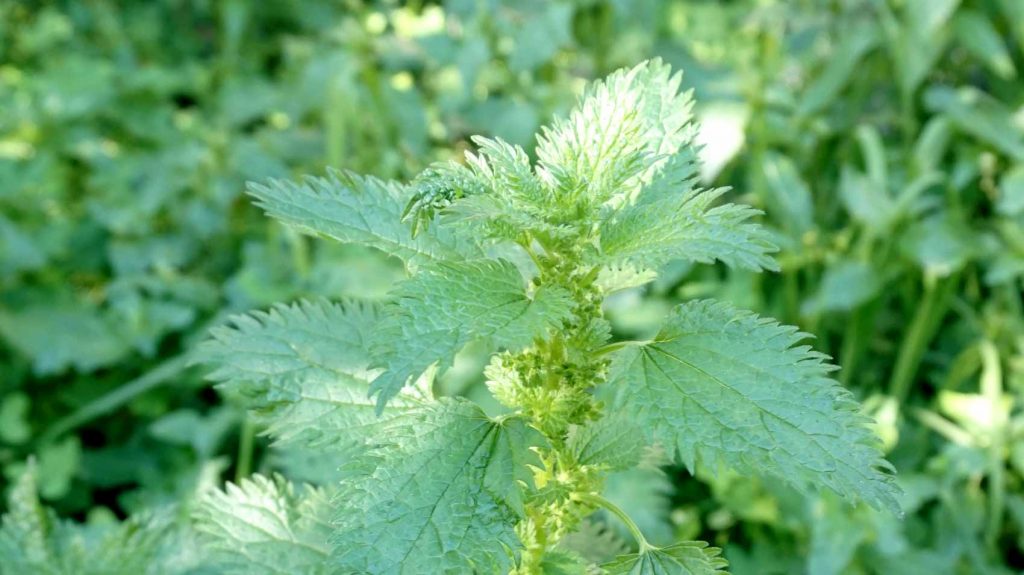 Stinging nettle grows wild in temperate regions around the world, also in Crete. It loves rich, moist soil high in nitrogen so compost piles are a favorite hang out for stinging nettles. They prefer sunlight, but will tolerate some shade.  You’ll find patches in disturbed soils, along streams or river banks, on old homesteads and along the edge of clearings or forest pathways where the sunlight comes through.

WHEN TO HARVEST STINGING NETTLE

Stinging nettle is a cold season perennial plant, meaning it is early to pop up in the spring.  It grows rapidly and will reach it’s typical 3-5 foot height quite quickly. The optimum time to pick stinging nettle is just before blossoms develop in spring and early summer.  Once nettle has gone to seed, the leaves will become a little bitter and develop gritty particles that may irritate the urinary tract of some people.

Cut about 2 -3 inches above ground level just above where there are leaves branching off. By cutting just above that spot, like most garden herbs, you actually encourage new growth.

HOW TO USE STINGING NETTLE

Cooking, drying and crushing stinging nettle will disarm the stinging.

Infusing a large amount of dried stinging nettle leaves in water for a long period of time is one of the easiest and most traditional ways to obtain nettle tea benefits.

Generally, one teaspoon of fresh or dried nettle per cup of tea is a good ratio, though some people use up to four teaspoons of dry leaf per 2/3 cup water. For a stronger infusion, you can crush the leaves with a mortar and pestle just before adding the water.

The stinging nettle is also excellent as a food – not only because of its abundance of nutrients, but also because of their fantastic taste. It offers a variety of vitamins, minerals, fatty acids, amino acids, polyphenols and pigments — many of which also act as antioxidants inside your body.

One way to enjoy stinging nettle is to replace the spinach in the Spanakopita, but you can also cook it with other green as “Horta” or us it in an omlette. There are many ways to add stinging nettle to you diat and there are several sorces for recipies online, like this one: https://honest-food.net/grasping-the-nettle/

Greek Spanakopita Made with Stinging Nettle