The Tripiti Gorge on the south coast of Crete can be completely covered with the four-wheel drive vehicle. In addition to an overwhelming panorama between mountains and the sea, it offers a dash of adventure on Crete holidays on gravel roads between steep walls.

After the famous Samaria Gorge, the longest gorge of Crete, the Tripiti Gorge is probably the most visited gorge of Crete. This is thanks to the spectacular views and their overwhelming towering cliffs. At the end of the gorge there is an idyllic pebble beach with a calm sea and a small tavern offering snacks and refreshments. 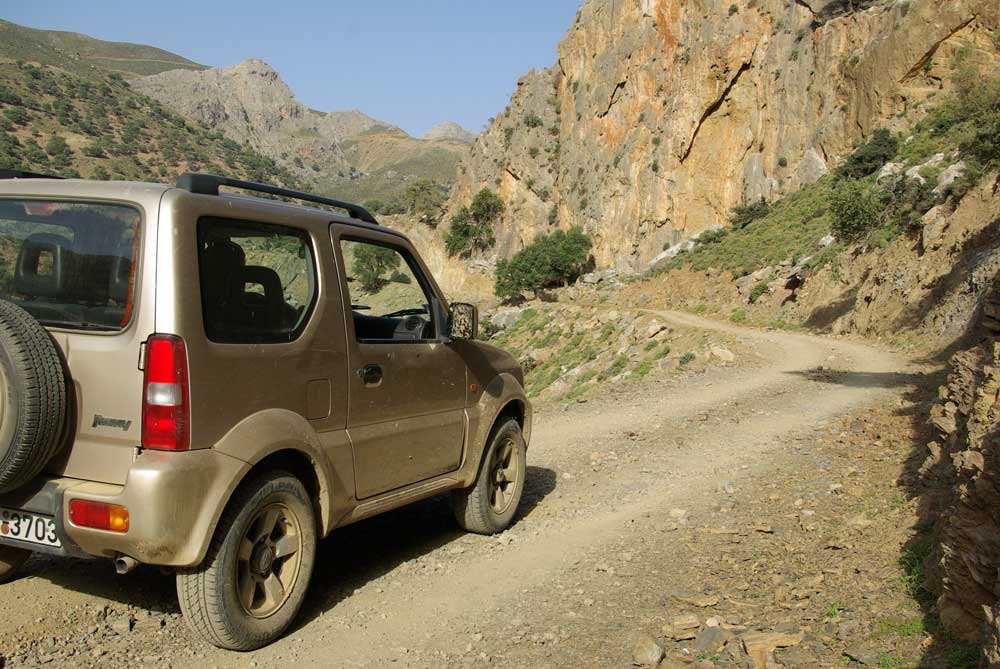 Tripiti is located on the south coast of Crete, about 12km east of Lendas. Here is also the entrance to the gorge. For the trip to Tripiti a four-wheel drive SUV is highly recommended, because the gorge can only be reached on unpaved pistes.

Two slopes lead to Tripiti. The first via a branch on the route from Lendas to Krotos over the wild landscape of the Trafoulas cape. The second piste leads over 9km from Vassiliki towards Lendas over the pristine Asterousia mountains directly into the gorge. The panorama is overwhelming the whole ride!

The gorge of Tripiti can be used on its entire length to the beach with the SUV and holds some extremely impressive passages ready. Even the entrance to the Tripiti Gorge gives a foretaste of the steep, almost vertical walls that await visitors inside.
In some places you can park the car for a short while and walk a few meters to the river – on foot, the mighty cliffs look even more impressive under the open sky!

The tamarisk-lined beach of Tripiti, like most beaches in Crete, is made up of small pebbles and offers clean, calm seas. A small tavern fights the hunger in between, otherwise there is no infrastructure on the beach of Tripiti. Still, the secluded beach can get quite crowded, especially in the high season of August.

Near Tripiti beach, at the exit of the gorge, there is also the small cave with the Panagia Tripiti church, which gave its name to the gorge and the town. On a hill in the northeast are still the ruins of the ancient Minoan settlement Papouri to see. Due to the tiny windows and doors, it was once thought that dwarves used to live here. The view of the southern coast of Crete and the sea is absolutely breathtaking. To the east and west of Tripiti Beach are two more hidden pebbled coves that offer soft waves and mostly absolute solitude. The small beaches form a picturesque scenery with large rocks and the play of colors of the water and are ideal for diving and snorkeling.