This impressive old olive tree is nestled in a beautiful landscape, in the hills of the Messara plain, near the village of Kamilari. The path to the tree begins at the crossroads in Metochi, opposite the spring, next to the Pizzaria, which is meanwhile also signposted.
The path leads for about 15 minutes through the olive groves and then right over a field, just follow the signs with “olive tree”. 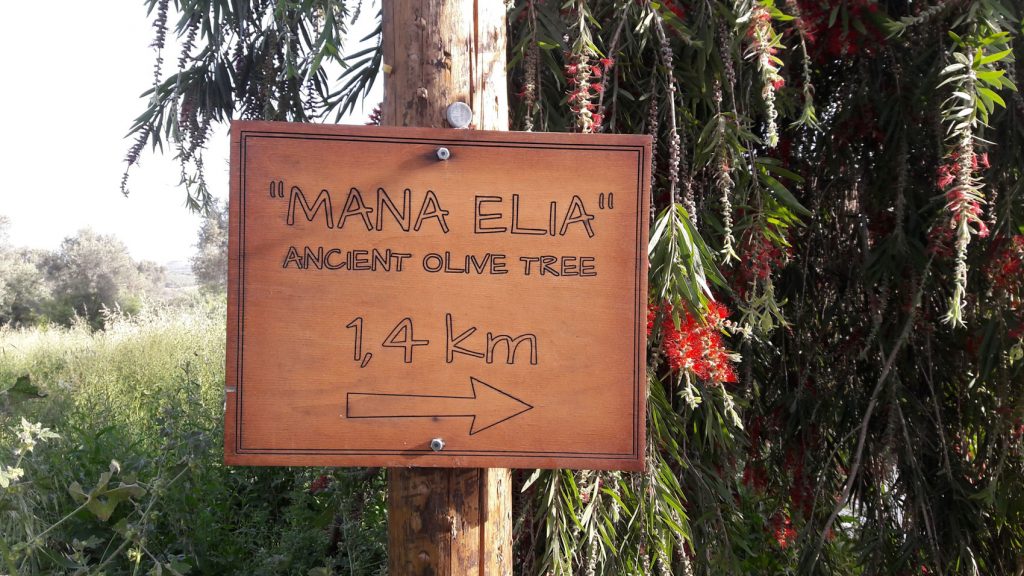 A few years ago the tree was just standing in the middle of an olive grove and you had to look for something to find it, but since 2016 there is a sign next to the tree and a circle of boulders with different engravings surrounding him in a circle.

We were told that the tree should be felled as it stands in the way and that the population of Kamilari, including some immigrants, have placed the large stones around the ancient olive tree as protection. Shortly there after, he was recognized as a monument and is now sheltered in the olive grove.

The “Mother Olive” of Kamilari was classified by ACOM as “monumental” because of its age and its proximity to important archaeological sites. The local authorities and residens reflecting great significance named it “Mother Olive Tree”.
The trunk of the tree is of distinctive aesthectic and is surrounded bei 12 large stones which were transferred there from the Cultural Association of Kamilari forming a symbolic fencing in order to highlight and protect the tree. On 8 out of these stones various symbolic representation are carved, som eto refer to the Minoan era, such as the double ax figure.
This Olive ree is located at the site “Dyo Lakoi” near the village of Kamilari in the municipality of Phaistos  and close to the Minoan tombs of Kamilari and also close to the Minoan Site Palace of Phaitos.

The tree, which belongs to Aikaterina Nikolidakis, is a variety of “Throumbolia”, locally called “Chontrolia” grafted with wild olive variety.
The size of the tree, especially the maximum diameter of the trunk and the circumference at a height of 0.8m allow an approximate estimate of the age. According to the method of annual rings and average annual radial growth (0,5 mm) is about 2800 years old that places it in the first ear of the appearance of the tree in the late Minoan period of Cretan history.

A visit to the Mana Tree can be wonderfully combined with a meal in the excellent taverns of Kamilari, the Pizzeria Ariadne, located directly at the junction, but also the Kipos Taverna and the Chrisopigi are nearby.